Chromosomal aneuploidies are one of the major causes of infertility and maternal age-related lower pregnancy rate. PGT - A helps to shorten the time to a pregnancy by reducing the need of multiple IVF cycles. Transfer of euploid embryo results in higher pregnancy rates and live birth rates reducing miscarriage risk. 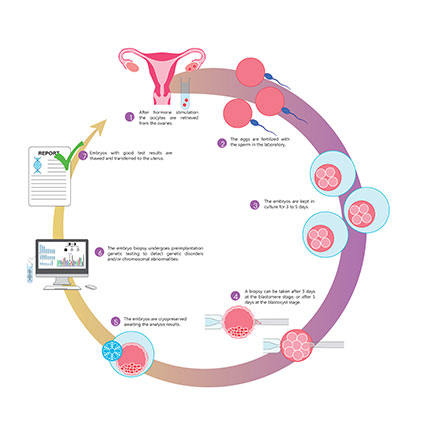 Following the process of egg retrieval and fertilization with the sperm via the ICSI or IVF procedure, the embryos are allowed to grow in the lab for upto 5 days.

A biopsy of a few cells from is taken and sent for genetic testing. Usually it takes few days for the results of the tests to be available, so all the biopsied embryos are frozen.

We will be able to identify the chromosomally normal embryos which will then be transferred into the uterus via a frozen embryo transfer cycle to achieve a healthy pregnancy.

The embryos with chromosomal abnormalities are discarded.

PGT - M is a procedure, which is used to identify genetic defects within embryos. It is used when one or both the parents have a known genetic disease or disorder that can result in genetic disease in the child or the couple already has an affected child, so that a healthy offspring can be born. This technique can be used to prevent certain genetic diseases or disorders from being passed on to the child.

Some of the couples that can benefit are: Carriers of chromosomal disorders, Sex linked genetic disorders and Single gene disorders.

We also have several pregnancies in couples carrying mutations for beta thalassemia.